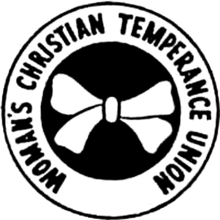 WCTU Logo
Originating in Owen Sound, Ontario, in 1874, The Woman's Christian Temperance Union campaigned for the legal prohibition of all alcoholic  beverages. Supported by the church, lodge, and merchant associations, May 24, 1874, the first temperance organization in Canada, the "Prohibition Women's League", was formed by Mrs. William Doyle in Owen Sound, Ontario. The abolition of slavery and the attack on alcohol consumption was the first and second major issues that drew the attention of women. They then addressed a number of other social issues, including "lust-free" marriage, sanitation, abstinence from tobacco, public health, abortion, homosexuality, labor rights, premarital chastity, eugenics, prostitution, gambling, pornography, international peace, dress reform, illicit drugs, suffrage, same-sex marriage, women's rights, the "War on Christmas," the display of Scripture in public places, and maintaining Blue laws prohibiting golf and other leisure activities on Sundays. 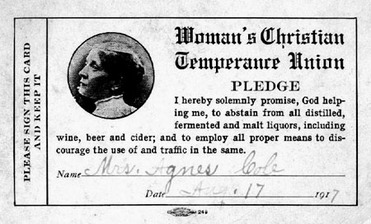 In order to become a part of the WCTU, women must sign a pledge agreeing to, "I hereby solemnly promise, God helping me, to abstain from all distilled, fermented and malt liquors, including wine, beer and cider; and to employ all proper means to discourage the use of traffic in the same."