The Women'S Right to Vote

Despite women's contributions to the war, it was still in many ways a male dominant country.  Many women felt it was only fair that they and men were given equal rights, since they were now doing men's jobs.Several Canadian women organized themselves into suffragist movements, trying to gain for themselves the right to vote.

The efforts of these brave women would not go without reward; In 1916, women in Manitoba were given the right to vote.  Just months later, Saskatchewan and Alberta followed, and the following year, Ontario and British Columbia also granted suffrage to women.

By the end of the war, all women over the age of 21 (except Aboriginals, Asians, and women of other racial minorities) were permitted to vote.  And by 1920, with the Dominion Elections Act, women could also run for parliament.  Although women were still considered inferior to men in some respects, Canadian suffragists have shaped a future of equality in Canada. 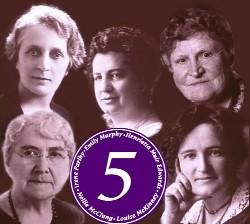 In the 1920s, five Alberta women fought a legal and political battle to have women recognized as "persons." The landmark decision by the British Privy Council, the highest level for legal appeals in Canada at the time, was a milestone victory for the rights of women in Canada.

While women were granted the right to vote in most Canadian provinces, women groups continued seeking to improve the status of women on a social, economic, legal and even political level. Women, were not legally recognized as "persons." The word "person" always had a much broader meaning than its strict legal definition, and it therefore had been used to exclude women from university degrees, from voting, from entering the professions and from holding public office.

When women married, they lost all of their rights. It was the "Famous 5" (Emily Murphy, Henrietta Muir Edwards, Irene Parlby, Louise McKinney and Nellie McClung) who contested the legal interpretation of the word "person" before the Supreme Court of Canada in 1927. In its ruling, the Canadian Court stipulated that the term "person" did not apply to women. The Famous Five appealed the ruling before the Judicial Committee of the Privy Council of London, which reversed the verdict of the Supreme Court of Canada. The Privy Council stipulated that the term "person" was ambiguous and that if Parliament had wanted to exclude women from the term "person," it should have said so. And so it came to pass that in 1929, women acquired the right to exercise official functions, to attend university, and to practice a liberal trade.