Prohibition is the ban of production, import, and transportation of liquor across the country.

During the war, the prohibition campaign gained momentum. Every provincial government except Quebec banned the sale of liquor due to women groups such as the Woman's Christian Temperance Union. It was argued that grain should be used to feed soldiers and civilians rather than be used for the production of alcohol. It was also pointed out that the production of liquor did nothing to support the war effort.

After the war, prohibition had some positive effects on society. Crime rates dropped, more money went home to the family, fewer work days were missed, and arrests for drunkenness decreased. But with these positive effects came the rebellious acts. A new crime was created called "boot legging." "Bootleg booze" was illegal liquor made and sold by "boot-leggers" who smuggled illegal alcohol across borders. Prohibition was becoming impossible to enforce. Realizing the money being lost due to no liquor sales, the government chose to tax bad habits , rather than forbid them. 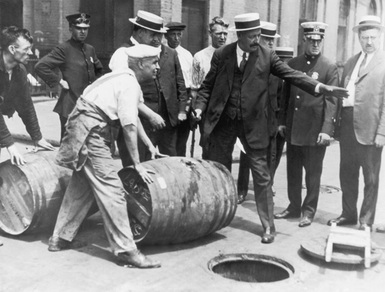